Facts About Ticks: Everything You Need to Know for a Tick-Less Life

Will the avalanche of adult realities that contradict things we learned as kids never end?

Dogs don’t go to a happy farm when they get sick. There’s no such thing as a benevolent, fat, jolly gift-giving man that can squeeze down chimneys and eat a globe’s worth of biscuits in one night – and ticks aren’t always a positive sign that you’re doing well in school and it’d be nice if your parents could recognize that.


Uhh… ticks; right. Little bitey, creepy-crawlie bugs that everybody fears but most of us know basically nothing about.

Today, that changes. Let’s dive into a list of facts about ticks that will help you defeat these blood suckers!

In the spirit of ‘don’t run before you can crawl (like a tick)’ we’ll start with the big question: what the hell actually are ticks?

Technically, they’re not actually insects but are in fact part of the arachnid family, proving once again that absolutely nothing good comes of arachnids. Nothing. They are generally very small little creatures, making it hard to spot one when it clings on to you – which isn’t good, seeing as they want to suck your blood.

Given that they’re so small, it’s quite difficult to actually know what you’re looking for when it comes to tick searches (especially if you have dogs or cats with thick fur). The size, shape and color of ticks depends on their gender, type, how old it is, as well as how long it’s been feeding but you’re generally looking for something no bigger than 3mm and that’s at the fully formed stage. 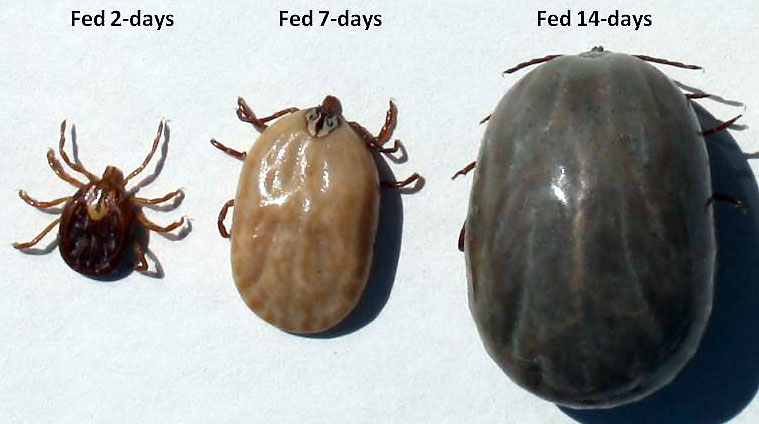 Usually, they’ll be dark in color: a deep brown or reddish hue and have a large ‘dorsal’ section of their body which sort of makes them look like a sack resting on eight legs, which isn’t actually far from the truth.

Naturally, they have eight legs and most of them have a strange kind of beak like nose structure… Lucky they’re so small, because they aren’t winning any bug beauty contests, I’ll tell you that.

What do ticks do?

In terms of how a tick fills its working week… there’s not a whole lot to say. A tick’s existence is pretty much one eternal search for its next meal which means they will often lie in wait in specific locations waiting for a blood-filled mammal to pass on through and expose themselves. On which note…

What do ticks eat?

Well, at risk of sounding like I’m repeating myself…That really is the staple and, indeed, the luxurious fancy Christmas-day meals of ticks: blood. That’s all they ever want. No five-a-day and exciting evening dinners trying the new ethnic restaurants in the area.

And they aren’t particularly fussy where they get it from either – a tick’s diet isn’t specific to any specific type of mammal. They’ll happily jump between species, just as long as they can get a good latch onto the skin and hunker down for a long drink. 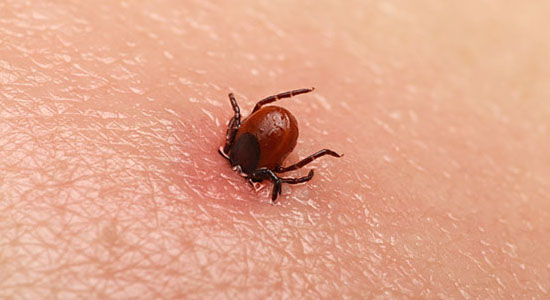 After they’ve had their fill of your blood, and have swollen up in size, they’ll simply unhook themselves and drop off to the ground, where they’ll either move on to a new habitat or begin to lay their eggs if they’re female.

This might sound a bit hard to believe: what if a tick finds itself way out in the middle of absolute nowhere. No birds, no squirrels, no rats, no humans, no dogs… what does it eat? Nothing. It’s thought that a fully-grown tick can go as long as two or three years without a host…

How long do ticks live?

So how long does the average tick live then? This all depends on the age of the tick, the environment it’s in and what food there is available. Now, although I’ve just told you that a grown tick can last a stupendously long time without having a bloody meal (ha!) – this comes with a lot of caveats. 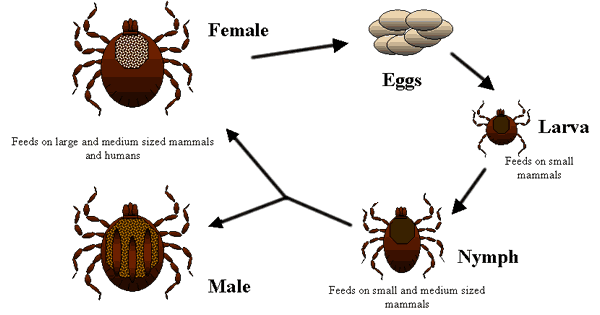 Female adult tick lays its eggs (providing it has enough energy/sustenance to do so).
The egg hatches and a little six-legged larvae emerges. It looks pretty much like an adult tick except it’s smaller and it won’t get its big boy seventh and eighth legs for a while.

Once it feeds, it’ll drop from its host (usually something small like a bird) and digest. Over a week or so, it’ll molt and grow, until it sprouts its extra legs. Now it’s a nymph.

The nymph basically does the same deal again; eats, rests, grows into the adult tick. From there, the only goal is to procreate – the men often die after fertilising the female. Worse ways to go, though eh?
The female will usually die after laying her 3,000 – 6,000 eggs and to be fair to her, no wonder. I sometimes feel like I’m going to die after digesting a heavy dinner.

As for the length of time a tick can live, from birth to death? Anywhere from two months to two years depending on how readily available blood is and if they get lucky with a nice, smart and financially stable tick of the opposite sex.

No, but I can see why you’re asking – if they can’t fly, how can they manage to sink their grubby little beaks into hard to reach places like the back of the neck? We’ll get to that next, but just know that they can’t fly… They don’t even have any wings to speak of. Shh, don’t give them any ideas.

How do ticks get on you?

So if they can’t fly how do they manage to get themselves out and about and onto unsuspecting prey?
It depends on what kind of tick you’re dealing with, which can be narrowed down to two general categories: hard shell and soft shell ticks.

Soft shell ticks tend to be a little more sneaky and cunning – perhaps because they’re much more susceptible to being smooshed. Soft shell ticks are likely to sneak into a prey’s bed while it’s sleeping and latch on that way (don’t worry, by ‘prey’, I’m generally talking about animals out in the wild, but still… Might not hurt to give your sheets a good wash more often). 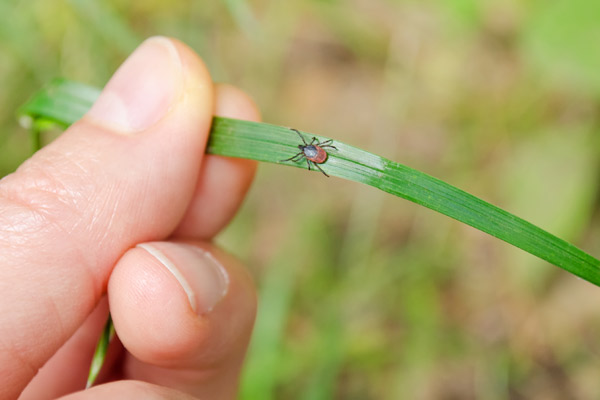 Hard shell ticks are much more daring, kind of like the stuntmen of the tick world. Despite having no wings and being unable to make webs like proper spiders, they still find a way: they can dangle from heights, by their back legs, or stand upright on long grass and leaves with their front legs raised up and outward, waiting for something to brush past them…Patient and sly. Two of the worst arachnid traits.

Fleas vs ticks: what’s the difference? 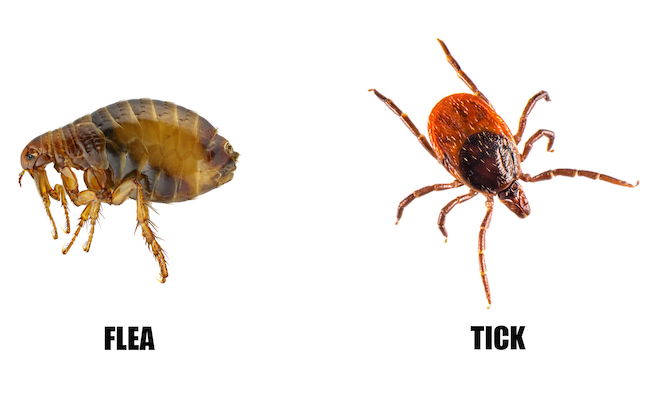 Fleas are renowned jumpers – this is how they get onto their prey in the first place: by leaping incredible distances relative to their tiny stature. Whereas ticks can’t jump at all, which is why they’ve developed such iron-willed patience and sneaky techniques.

Fleas are generally monogamous. Once they find a warm blooded host, they’ll settle down for the long haul (even if that means being killed off by you and your flea-repellents); whereas ticks will only latch on to hosts for a matter of days before absconding off like the secret service.

Ticks can withstand pretty extreme temperatures, especially on the colder side of the scale. Fleas, on the other hand, like it nice and humid and clammy – too cold and they can barely function, too hot and they’ll dry out and die.

Ticks have the potential to live a lot longer than the average flea (whose lifespan is around 100-150 days given the right climate).

Can you get diseases from ticks?

Ticks carry a whole host of nasty infections and diseases, which is why public awareness of them has risen considerably in the last few decades.

Usually, the big name you’ll hear associated with ticks is Lyme disease (which is carried by the deer tick); it’s thought that the rising risk and spread of Lyme disease has been due to an increase in deer populations, and subsequently the deer tick.

Other tick-borne ailments are as varied as fevers (Spotted fever, Relapsing fever, Colorado tick fever), Typhus, meningoencephalitis, Tularemia… the list goes on and becomes ever more difficult to pronounce. Which always seems like a bad sign when it comes to infections; the more syllables, the more deadly. Fact.

(Not in any way, shape or form an actual fact. Not even an alternative fact.)

In case I’ve now worried you, here’s a list of common tick-borne illness symptoms so that you can put your mind to rest:

Worth noting: a very prominent and clear sign of Lyme disease is a large ‘target’ shaped blotch or lesion on the skin, around the bite area.

Are tick bites, themselves, dangerous?

Stepping aside from the possible ailments that can spread from a bite (which isn’t hugely likely, by the way), it’s worth looking at the wound itself.

Generally, tick bites are harmless and you’ll rarely even notice them. However, if you’re allergic or extra sensitive to nasty little arachnids sinking their…teeth? I want to say teeth… into your skin, then you might notice some swelling on the bite area, an irritation or burning sensation around the wound and some itchiness to boot.

In terms of treating the area; simply slap some antiseptic cream on it and moisturize it and you should be alright.

Can I just pull a tick off of me?

It’s not quite as simple as just yanking the little sucker off where and when you notice it…tick removal is quite a delicate process, but a rule of thumb is to use narrow tweezers and to try and gently pry it loose. 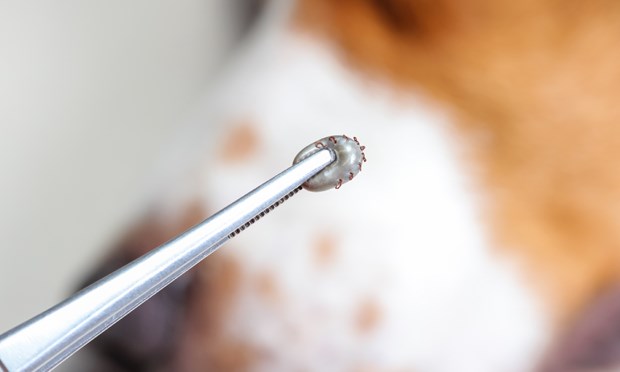 Try not to jerk, yank or twist at the tick as you then run the risk of breaking it apart and leaving the mandibles and mouthy stuff all stuck in the wound which can lead to some of the infection issues discussed above. Find out the best way to remove ticks!

Where do ticks bite?

Because they’re on the hunt for blood and they have a keen sense for body heat, once a tick finds its way on to you it will likely move to a warm, perhaps damp, area of the body such as your groin, armpits or your scalp.

It’s unlikely that you’ll feel the actual bite and often the only way you’ll know you have been bitten is by feeling or locating the tick itself, given that it tends to latch on for a day or two.

It’s the same with pets – ticks love dark, moist areas the most so be sure to check them especially thoroughly whenever you return from tick-infested areas. Here’s how to check your dog for ticks!

Where do ticks live?

Ticks are found all over the world, in all sorts of climates and terrain, but they tend to hunker down in moist, humid and heavily vegetated environments. Shrubbery, long grass, unkempt bushes… the whole green world is their playground, which is why it’s always important to check yourself and your pets for any passengers after a day of frolicking in the countryside like the Von Trapp family.

I hope you were paying attention. There’s going to be a test next week and you want a nice big tick on your answers don’t you?

Previous Post Flea Bites On Dogs: What They Look Like and How to Treat Them Next Post How to Get Rid of Flying Ants (and Never Deal with Them Again)

So.I read your article and I think you should delete part of the title and only title this as facts about ticks. There is no information leading to a tick free life…