How To Kill A Scorpion (Without Killing Yourself In The Process)

Ah, that age old question pondered by all those who are both lucky and unlucky enough to live in dry, hot regions: how to kill a scorpion (without killing yourself in the process).

It usually goes something like this. It’s night time. You’re lying in bed in your fluffy pyjamas, basking in the comfy glow of your happy place. Everything’s quiet. Peaceful. Calm. And then you feel it. That familiar feeling that says you need a visit to the bathroom.


Sighing at the injustice of the world, you click on a lamp and swing your legs reluctantly out from under the covers. And that’s when you see it. Some prehistoric monstrosity crawling out of the darkest recesses of your closet, its many eyes glinting with evil delight as it scurries towards you. You scream, but screaming won’t help you now, my friend. It’s just you and the scorpion.

Scorpions are scary. And personally, I’d rather run a mile rather than take one on, mano a …scorpiono? But I’m told that there are people out there who aren’t massive cowards, and will actually stand and fight instead of run and hide at the first sign of approaching pincers. So for those brave/crazy souls, here’s a few tips on how to kill a scorpion without harming yourself in the process.

Before you take on some scuttling demon in scorpion form, you need the right attire. And I’m not talking about those cute shoes you’ve been saving for the right occasion. Scorpions are merciless fashion critics, and you’ll need to make sure your ensemble is right.

But in all seriousness – forget about dressing to impress and focus on bundling up to save your previous skin. Jeans would be a good idea, or pants made from similar heavy fabric that can stop a stinger from reaching your skin. The same goes for your arms and torso.

The heavier your clothes, the safer you’ll be. Cover your feet with closed shoes, not sandals. And a good pair of gardening gloves will protect your hands. Ok, maybe you won’t look your best. But that scorpion will be laughing out of the other side of his mandibles once he finds out he can’t hurt you.

Oh, last crucial tip: scorpions are nocturnal so you’ll probably be doing the hunting at night. That means to actually see that scorpion you’re about to kill, you’ll need a UV flashlight. Get one – they’re invaluable when it comes to scorpions.

Your Weapon Of Choice

Among the brave souls who regularly engage in hand-to-pincer combat with our arachnid foes, opinion is divided as to what makes the best anti-scorpion hand tool. As tempting as it might be, I wouldn’t recommend blasting it with a handgun – it’s overkill.

The trick to killing scorpions is to pierce their exoskeleton, the tough outer shell that surrounds their body and keeps all their squishy bits where they should be. To do that without exposing yourself to that menacing stinger, you’re going to want to keep your distance.

Many people swear by long tweezers that can pierce the scorpion’s body, then pick it up and keep it at arm’s length while you dispose of its corpse. If you’re not lucky enough to have such an implement, a long sharp knife that enables you to keep out of reach of the little beastie’s stinger might do the trick.

If you’re planning on doing enough scorpion killing to warrant buying some long tweezers, go for ones that are at least 10 inches long. Or if you’d prefer to DIY it, a screwdriver taped to the end of a long stick works just as well.

Others prefer blunt force. You can bash a scorpion with a stick, a golf club, even an especially heavy shoe if that’s all you have. But be careful. Some scorpions are very good at flattening their bodies, so that what you thought was a killing blow ends up being more of a love tap. Make sure the scorpion is fully squashed before you get too close.

Last but not least, for all of us who are a little more squeamish and would rather not do any crushing or squishing – there’s hope for us yet. And it just may be the most convenient way to kill a scorpion: use a scorpion killing spray. Terro’s Scorpion Killer is mighty effective and kills on the spot. 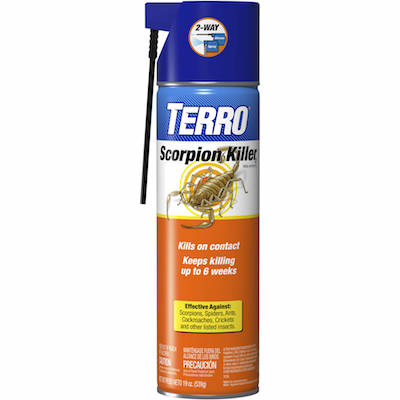 Ok, so you’ve triple checked. You’ve prodded and poked its body. You’ve insulted its mother, and the scorpion still didn’t stir. You’re sure it’s dead. But hold on there, killer. Just because it’s dead doesn’t mean it’s safe. A scorpion can still sting you FROM BEYOND THE GRAAAAVE!

Stay well clear of that stinger when picking up the body of your vanquished foe. If you can sweep it into a dustpan or similar without touching it at all, that would be smart.

Disposing Of The Evidence

Resist the temptation to mount your freshly killed scorpion’s head above the door as a warning to others. Scorpions don’t see very well, and they wouldn’t notice their cousin’s dismembered corpse on your mantelpiece.

So probably the best way to get rid of a scorpion’s corpse is to bury it. Dig a small hole in your garden and toss it in. Flowers are optional. If you want to say a few words, go ahead. But do it quietly, unless you want your neighbors to think you’ve lost your mind.

Once the scorpion is gone, you’re going to need a new name and a fake passport. Buy a bus ticket with cash and…oh, wait. Never mind. I was thinking of… something else. A dead scorpion has no forensic team out looking for it, and its relatives are very unlikely to come looking for revenge. So you can sleep soundly in your bed knowing that your house still belongs to you, and you alone.

Until the next time a scorpion shows up…