Mosquitoes actually get all their nourishment fruit and plant nectars. Which might leave you wondering, “Then what the hell are they biting me for?”

Good question. When it comes to mosquitoes, it’s only the fairer sex that feels this blood lust. That’s ’cause she needs the protein in blood to help her eggs develop.

And she’s got a lot of eggs – female mosquitoes can lay up to 300 eggs at a time.

Even worse news? Although a female mosquito only lives about six to eight weeks, she can get pregnant up to three times before she dies. So not only does that entail a lot of mosquito bites for you while she tries to nourish her eggs, but close to 1,000 potential mosquitoes to deal with in the near future.

As you already know, female mosquitoes lay their eggs in stagnant water – which is why getting rid of any standing water near your house is one of the most basic steps you can take to keep mosquitoes away. Especially if you live in a mosquito infested area, you really want to be thorough since mosquito eggs can hatch in as little as one inch of standing water!

The good news is that this larvae phase is the easiest time to get rid of mosquitoes. But you want to act fast – mosquitoes only spend their first 10 days in water. Once they mature into adult mosquitoes, they’ll be a lot harder to kill.

So, let’s get right into the business of killing mosquito larvae. There’s more than one way to get rid of them and we’ll be exploring the 5 best options below.

Okay, here’s how to kill mosquito larvae before they develop into full-on, flying mosquitoes! 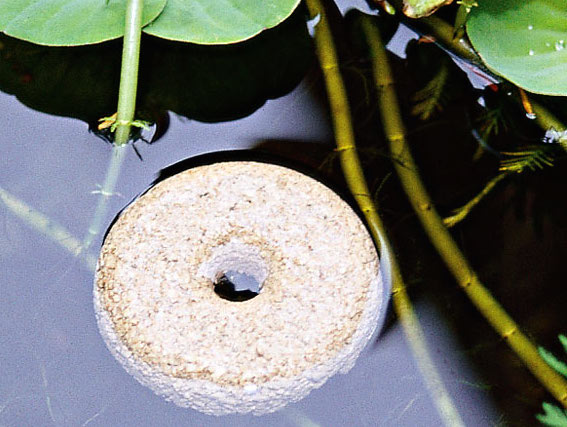 This is hands down the best way to kill mosquito larvae – it’s effective, it’s fast and it’s convenient.

These donut-shaped “dunks” are basically bacteria – specifically Bacillus thuringiensis israelensis (Bti) –  that are toxic only to mosquito larvae. Bti, the active ingredient, is registered with the EPA and there are no other toxins in the product.

This means that it’s non-toxic to pets and wildlife like frogs, fish, and other animals so you can rest easy on that front.

It’s also long-lasting – not only do these dunks kill mosquito larvae within a few hours, but it also lasts for 30 days or more, protecting against further larvae infestations. And it’s cost-effective, since a single dunk will treat around 100 square feet of surface water.

This is the only thing you’ll need to get rid of any current mosquito larvae and protect your home from future infestations.

How to do it: Drop a dunk into a mosquito-larvae infested area. Finis. 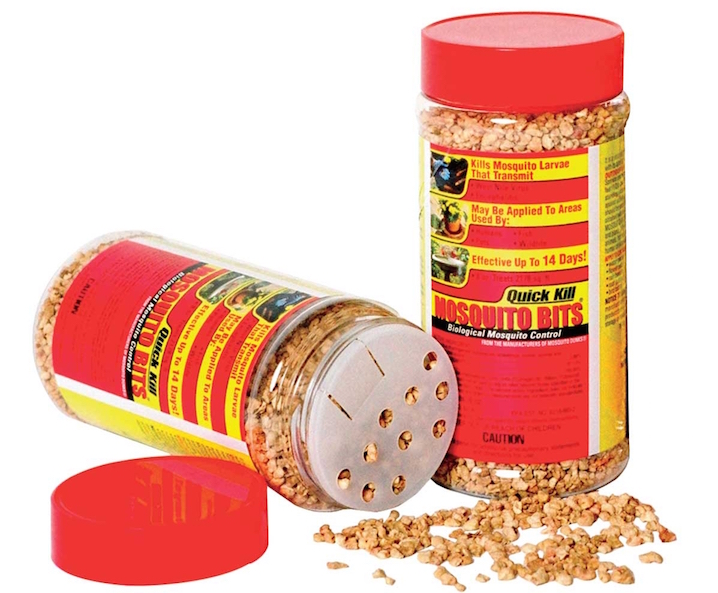 Mosquito bits are pretty much the same as mosquito dunks – they contain the bti bacteria that’s toxic to mosquito larvae and non-toxic to other wildlife.

The difference is that they’re in little pellet form, which makes them perfect to use in smaller areas of standing water where you don’t need an entire Mosquito Dunk as well as swampy and perpetually muddy areas that Dunks would have a hard time spreading out in.

Choose the Dunks for pools of water and the Bits for non-draining puddles.

How to do it: Sprinkle one teaspoon of Bits for every 25 square feet of standing water.

These need to be applied uniformly over the surface area to kill all the mosquito larvae. 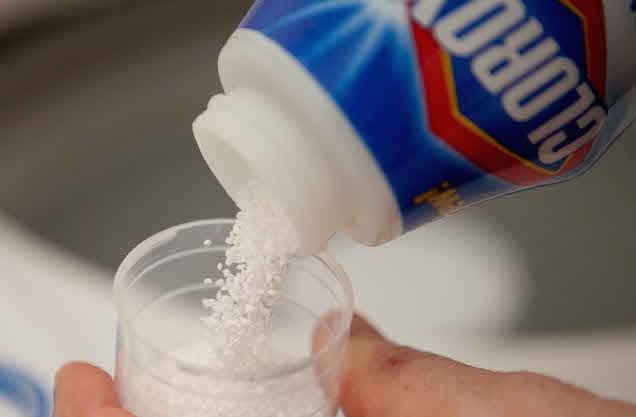 The very same chlorine bleach you use to whiten your laundry and sanitize your tools can also triple as a pesticide, according to the U.S. Environmental Protection Agency.

Just make sure you get bleaches with at least 5.25% sodium hypochlorite as their active ingredients. Clorox works.

Note: Keep in mind that bleach will kill mosquito larvae, bacteria and fungi but it’s harmful for pets and wildlife – never add bleach to a natural pond or stream and be careful you don’t add bleach to standing water that your pets, birds or other wildlife might drink from.

Overall, bleach is best used in pools and gutters but again, it is toxic and can harm any wildlife that drinks from the water. If you have animals on your property, you might want to choose a safer, less toxic alternative to killing mosquito larvae.

How to do it: If you can empty the item of water, do so and spray it with a 1-to-1 solution of bleach and water around once a week to make it an inhospitable place for mosquitoes to breed.

If you have regular standing water, you only need a small amount of bleach – around 1 tablespoon for every 1 gallons of standing water. 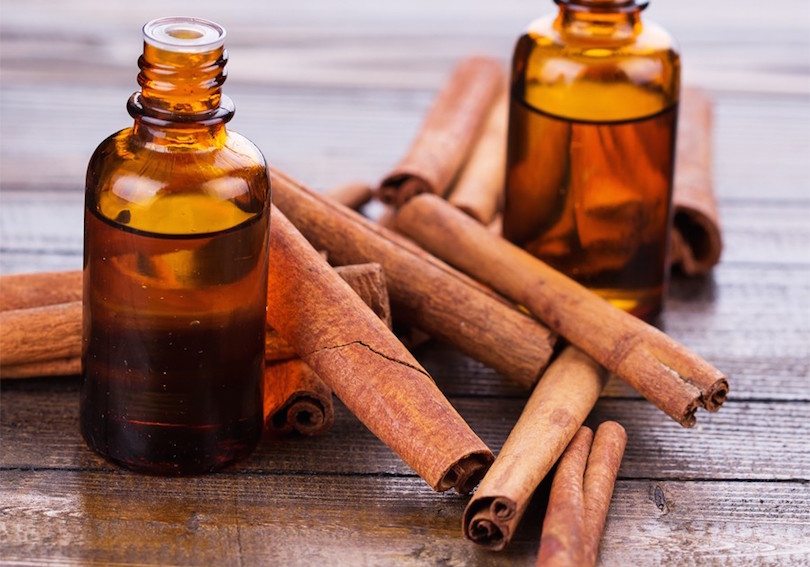 It tastes delicious sprinkled atop your coffee and desserts and it offers a natural yet powerful way to kill mosquito larvae. Can you guess what it is?

Yup, we’re talking about cinnamon. Turns out it’s an all-natural, environmentally-friendly way to kill mosquito larvae. And it comes with the additional benefit of smelling yummy.

Of course, you’re not going to sprinkle cinnamon powder into standing water and stir it about – you want to get the more potent cinnamon oil to do the job.

How to do it: Add in a ratio of 15% cinnamon oil to 85% standing water to quickly eliminate mosquito larvae.

You can also use cinnamon oil in your body lotion for anti-mosquito benefits. Just make sure you don’t overdo it – stick to 1 part cinnamon oil to 20 parts lotion. 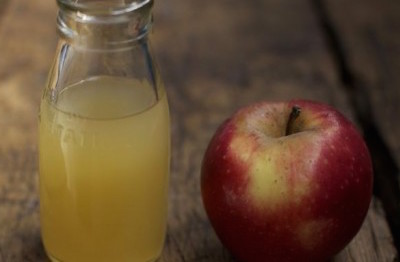 Not only is apple cider vinegar fantastic a natural way to sanitize your household surfaces – it’s a pretty good way to kill mosquito larvae.

And of course, it’s natural and non-toxic so you can rest easy about wildlife potentially drinking from vinegar-treated water.

The only downside to this solution is that it’s not super potent – a study found that a solution of 15% vinegar to 85% water took 18 hours to kill mosquito larvae, which smaller concentrations (5% vinegar to 95% water) was ineffective.

Compare this to a solution of 15% cinnamon to 85% water – which killed mosquito larvae in only 6 hours.

But if it’s all you got laying around right now, it’ll still get the job done!

How to do it: Use apple cider vinegar at a ratio of 15% vinegar to 85% standing water.

Unfortunately, it is not only the “fairer” sex that requires a blood meal to flourish. All mosquitos must have a blood meal and will die within 72 hours if they do not.

By ‘fairer’ sex, the writer means ‘female’. Males do not need blood.

I want to raise Flieschmans brewers yeast in a batch outdoors for culture but don’t want mosquitos to breed there. What do you recommend?

I assume a spray like Pam or WD40 is effective for adding an oil sheen to kill larvae in small puddles like tires.

How to get rid of mosquito larvae and mosquitoes y septic tanks and surrounging soil?