Scorpion Facts and FAQs: Everything You Need to Know

We assume you’re not Google-ing scorpion facts out of intellectual curiosity. No, I’m afraid that when your online searches guide you toward these inquiries, you’re probably dealing with a scorpion infestation that you want to get rid of pronto.


The good news is that you’ve clearly got an advantage. For starters, you’re smart enough to know that finding out more about these nasty little arachnids is going to help you defeat them. You’ve also got the Internet, man’s great resource.

So let’s take you on a journey through some of the most frequently asked, screamed and begged questions about these buggers – and some tips on how to handle them.

Sun Tzu – famous for constructing The Art of War and for his smaller pest control business – said it best when he told us to ‘know the enemy’.

So, just what the hell are these weird scorpion things? 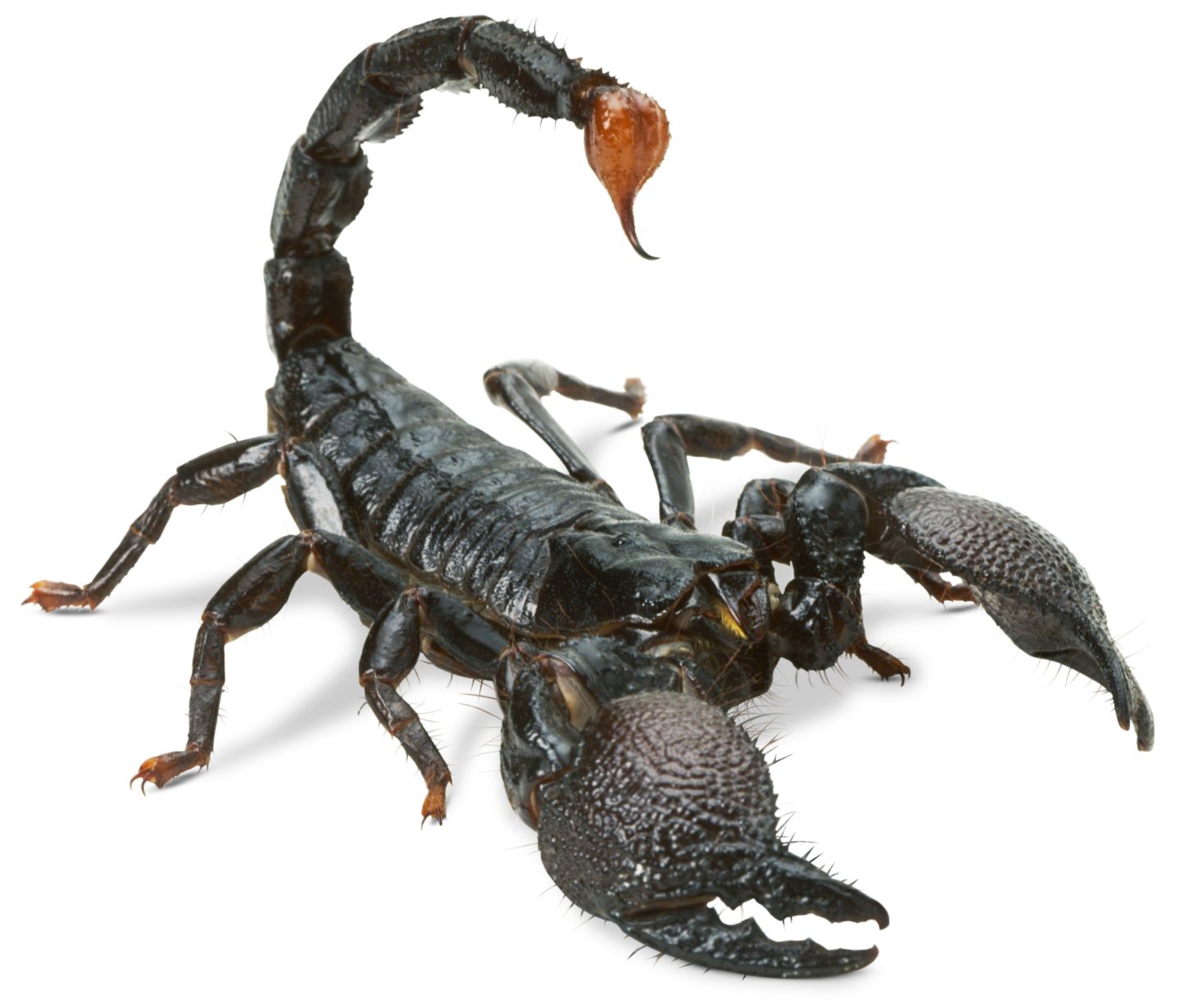 Although I called them arachnids, it’s just as pertinent to label scorpions arthropods, which means they have exoskeletons and no actual bones or vertebrae.

What do scorpions eat?

A scorpion’s main diet consists of insects like roaches, spiders and similar creatures, however some species have evolved in such harsh environments that they’re actually capable of drastically lowering the speed of their metabolism.

Some have actually managed to cut their diets right down to one, single, itsy bitsy insect per year, whilst still having the energy to strike with a vicious anger if the opportunity allows them. Speaking of striking…

The obvious, is of course, that bulbous stinger – the dorsal fins of the scorpion world – that delivers venom. Scorpion venom tends to act on the neurological side of things, by either paralyzing the prey or shutting its bodily functions down all together, making for an easy meal – even baby scorpions can pack the same stinging punch as their mother.

Let’s not forget those characteristic pincers on the end of the frontal pedipalps, though (the crab-like snappers at the front). These appendages are perfect for grabbing, holding and fighting prey before the stinger sweeps in to do the business.

Another interesting note – scorpions were the original smoothie dieters, thanks to their messed up digestive system.

They can only properly digest their meal through ‘external digestion’ in liquid form. This means that they vomit the digestive acids and juices onto their dead prey and then drink it back in once it’s melted into a sort of liquidy mish-mash of dead bug.

To date, no scorpions have been awarded a Michelin star.

How many different species of scorpion are there?

It’s thought that there are roughly 1,200 different species of scorpion and that most of them thrive in very hot climates (the only real exceptions are extreme locations like Antarctica and Greenland etc.).

The types of scorpion species vary by area so it may be worth looking up which species are prone in your local area so you can be better prepared for any nasty intruders in the home.

The better question is actually, “how poisonous are scorpions?”

It’s important to note that all species of scorpion have a venomous sting, but only a relatively small proportion carry venom that is lethal or harmful to humans (always get yourself checked out, though!).

Also, make sure you know which species of scorpions are most common in your area.

Another interested note: Bigger isn’t always scarier. Although an incredibly unscientific rule to abide by, sometimes the heat of the moment only allows the brain to remember silly, vague snippets of information.

So if you suddenly find yourself face-to-mandible with a scorpion and don’t know what to do, remember that it’s generally the smaller species that are more dangerous. (Which isn’t to say there aren’t exceptions – but it’s worth keeping in mind, if only to give you the courage to flee the room!)

So, all of that being said, you can see why it might be in your best interest to learn how to get rid of the beasties… even if it sounds like a nearly impossible task.

When are scorpions most active?

Scorpions are actually nocturnal creatures – once the lights are out, they begin their evening’s work hunting down any pesky critters they can. Unfortunately, this also means they take to hiding away in dark, quiet spots during daylight hours, which is where trouble can arise with humans.

Crevices, corners, space under furniture, old clothes etc. all provide lovely environments for a scorpion to cuddle up for the day.

Where do scorpions live?

As stated above, scorpions tend to be found in very hot, arid climates (there’s a reason you almost always catch stock footage of a scorpion in every Western movie ever filmed).

Usually they’ll hide away from the sunlight; so be very cautious around logs, stones, yard equipment, litter/trash left outside in these types of environments.

Scorpions are fairly simple creatures – they look for darkness, moisture, food and a comfortable place to lay their weird, exoskeletal heads. There isn’t too much you can do about the darkness aspect, aside from trying to limit dingy corners where possible around the home by allowing in sunlight, but the other aspects do leave some room for improvement.

Do your best to limit any unwanted moisture around your house (common sense, really, for all kinds of pest control) – this means leaky pipes, standing puddles of water, moisture leaking through from the outside and so on. This will only serve to attract nasty little critters on the lookout for a drink.

This means not only scorpions, but other insects that might make for a tasty meal. Take action to eradicate pests around your home for this reason: there’s always a bigger fish.

Where there are flies, insects and bugs, scorpions may not be far behind.

Keep your yard and exterior in good condition – don’t let logs, leaves, mulch and so forth accumulate near the home as this is basically a five-star all expenses paid hotel for the nomadic scorpions in your neighborhood!

How do scorpions get in the house?

Like most creepy-crawleys scorpions tend to make their way into the house via plumbing and pipework for the most part, due to the dark and the moisture.

That being said, as a result of being spineless and boneless, scorpions can squeeze through any space the width of a credit card (around 1/16th of an inch!) – so seal up as many cracks, holes, crevices and other tiny entry points around your home as you can to really stop them in their eight-legged tracks. Find out how to keep scorpions away!

Most scorpions are able to climb walls and other vertical spaces, depending on the material. Porcelain and plastics tend to make it difficult for them, however, much like spiders getting stuck in the bathtub.

A scorpion is more likely to be hidden away somewhat rather than be exposed on a wall or other vertical surface for too long, though. That said, they’ve been known to make their way across ceilings… unsuccessfully. Might be worth double checking your bed before sleeping if you live in a scorpion prone environment!

What do I do if a scorpion stings me?

Generally speaking, it’s best to first wash and clean the affected area so as to clean out the ‘wound’, before applying cold to the injury (even if it’s just those frozen peas you were saving for dinner) to try and reduce swelling.

Keep an eye on your symptoms and phone a poison control helpline for further diagnosis – they will be able to help identify what species has stung you and whether you should be alarmed about your symptoms, if there are any.

From there, either nurse the wound yourself or take the recommended steps to have yourself checked over by medical professionals. It’s always worth getting a professional opinion on something as risky as a sting.

Above all else: never go after or try and capture the scorpion afterwards, this just leaves you open to more stings and possibly a much more serious situation!

How long do scorpions live?

Compared to other, similar creatures, scorpions tend to live to a very ripe age of around 2-6 years on average. Naturally, some species are known to last longer and others much shorter, but generally speaking, it takes around 1-3 years for a scorpion to reach maturity.

How do I find scorpions?

If you’re particularly stubborn, adventurous or experienced, you might want to take the fight to them and hunt out any pesky scorpions living around your home before they become a nuisance.

First off, jokes aside, this is a very risky thing to do if you don’t know your species from one another and even then, knowledge doesn’t mean you’re any less likely to get stung.

If you’re still determined to hunt them out, however, there is a useful tool at our disposal: UV light. Due to their skeletal make-up scorpions will actually glow in the dark when a UV light source is shone upon them… Sometimes ignorance is bliss, though. You might get a bigger surprise than you’re expecting.

How do scorpions see?

Here’s another case of quality being more important than quantity. Scorpions actually have a great number of eyes – between six and twelve, on average – but incredibly poor vision all the same.

Their main sensory input comes from scents and vibrations in the ground, which they use to source food and welcoming habitats. This is why they’re best suited to night-time endeavors.

How many babies do scorpions have?

You might remember your mother carrying you around in a sack-like contraption as a baby, but her efforts are embarrassing compared to the average scorpion mother (who can birth up to 100 babies in one session).

When new born, scorpions cling to their mother’s back like a bus and are transported around until their first exoskeletal molt – after that point, they’re on their own.

How easy is it to kill scorpions?

Scorpions rank among the species most likely to survive, well, anything. Alongside their disgusting brethren the cockroach, scorpions are able to reflect great bouts of radiation, meaning that in the event of all out nuclear war, they’re likely to survive as a relatively intact species unlike the rest of us.

Scorpions, cockroaches and Twinkies. What a world we’ll leave behind.

Hopefully this guide to some of the most commonly asked questions and a few obscure facts about the not so humble scorpion will help you to better understand what you’re up against if you live in an arachnid-rich area.

And let me be the first to say, if you do live in an arachnid-rich area: I’m so, so, so sorry for you. May God have mercy upon your soul.

Just kidding – scorpions are a challenge to get rid of but it doesn’t mean you won’t be able to rid your home of them. Check out our full guide on how to get rid of scorpions for good!

Previous Post What Causes Roaches? 7 Common Causes of Cockroaches in Homes Next Post Best Flea Treatment for Dogs: A List of Treatments and How They Stack Up

Thank you for briefing me on something that i didn’t know before.